I God Save the Queen

Her Majesty Elizabeth 1, Queen of England, steps on a piece of chewing gum and stumbles and falls on the day of her coronation. Despite efforts to unstick her fine-heded shoe, she is eventually crowned barefoot.

In order to clear up one of the most notorious slips of the Empire, Scotland Yard1s criminal investigation division begins its investigations into the fingerprints found oil the chewing gum. Roald, Felicity, Peter,Pamela, Oscar and other students from Berkeley School, believing they are responsible for the accident, agree to meet at Westminster Abbey to try to recover their chewing gum stuck to the backs of the pews on their recent school visit to the abbey.

Arrested by the police at the abbey, they are taken to testif,’ about their alleged participation in Her Majesty1s fall. However, they are released, their belongings having been found intact, free of suspicion.

The arrest of Roald Dale and his friends recovering their chewing gum at the abbey helps the London police make an unprecedented discovery. London is rotten with chewing gum! On desks at universities, on public benches, behind seats in cinemas and theatres! Parliament, by the express order of Her Majesty, passes a law. It forbids eating chewing gum in al! of England under penalty of prison for offenders who will be taken to London Tower. The law is retroactive. Those found with any trace of chewing gum will also bejailed.

V Good Morning. And 110W the news from the BBC

Jack Williams, friend of Roald, is arrested when one of his pieces of chewing gum is discovered on a local train. A police officer and the recently created League Against Chewing-Gum Chewers take him prisoner while the radio announces the measures already undertaken: closing of schools, public parks, libraries to check them and clean them of chewing gum. One of the objectives of the League Against Chewers is to reach one thousand arrests a day.

Thirteen hearses driven by undertakers will collect all the chewing gum from the schools and take it to the outskirts of London to be burned in an enormous funeral pyre.

VII A song for the Queen. – VIII The Resistance attacks

Roald and his friends decide to organise themselves into a Resistance and fight the established order. Roald composes a hynm to identify them and which, to the beat of the drum, will convene the resisters. The group organises a demonstration in two days time in front of Parliament.

IX The revolt of the chewing-gummers

Despite the poor initial success of the summons, soon there are more than one thousand chewing-gummers. But the League has organised itself, too, and advances en masse amidst anti-chewing gum slogans towards Parliament. The clash is inevitable. First come the insults and then come the bkws. The police arrive and arrest many children, among them Felicity, Roald’s best friend.

Scotland Yard’s criminal affairs investigators progress. Numerous discoveries in the most unusual places reveal that children are not the only ones who chew gum Adults, too, when they were children, had this bad habit. The arrest of responsible adults then begins to swell the prison cells in the Tower of London. The police don’t waste their time. At the home of the Barts, little Oscar and his grandfather are detainees number 8,425 and 8,426. Meanwhile, not very far away, little Jack falis into ambush perpetrated by the black market.

The newspapers have turned the demonstration into a peaceful assembly silencing the denunciation of the Resistance. Meanwhile, the arrests continue. In the course of events and with no solution foreseen, Peter Roscoe tries out his formula to teach the government a lesson: a mass escape from the Tower of London. In his bedroom-laboratory he will create Super-resistant, Super-chewy “Bomb” chewing gum, ideal for knocking out the guards and facilitating a complete escape.

XII The Chewing-gum Plan goes into effect. XIII Escape from the Tower of London

Peter Roscoe enters the Tower of London carrying a doli inside of which there are 200 very special pieces of chewing gum. The plan consists of giving sorne of these pieces of chewing gum – concealed inside chocolate sweets – to the guards: explosions in the stornach, and rnouths closed shut by the chewing gum are just a few of the results. And another kind of chewing gum will enable children and adults to escape through the air in enormous balloons rnade of chewing gum…. 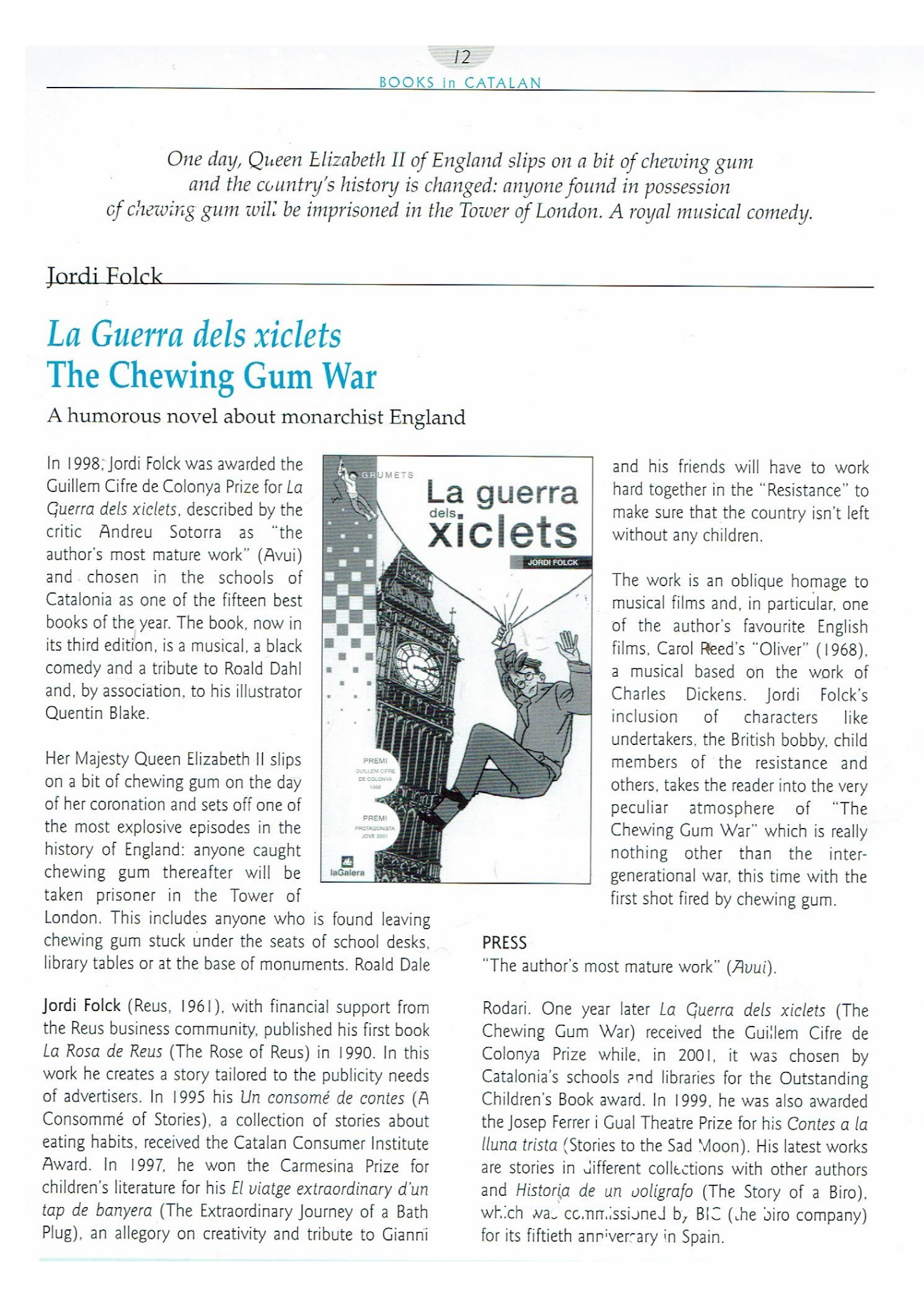